minnehaha K. was the first person to sing the praises of homemade mayonnaise and the simplicity of making it. I certainly learned how to make homemade croutons from her and don't think I've bought packaged croutons since.

Tonight, thanks to the raksallad (shrimp salad) I'm taking to a Scandinavian potluck tomorrow, I've finally made my own mayo for the first time ever. Yep, pretty durned tasty stuff.

Alton Brown recipe, modified by using sunflower oil rather than safflower (’cause I forgot which one I had in my cupboard while shopping, and the only olive oil I have on hand is extra virgin. Something like 3 bottles of it, but there you go). Preparation modified thanks to the Kitchenaid mixer

debgeisler gave me when she upgraded. I don't have an immersion mixer, and if I have a blender, it's been so long since I used it that I stopped looking after 3 likely cupboards because I'm just not sure there's one to be found. I do have a hand-me-down 1970s food processor that's been amazing the couple of times I've used it over the last 7 years or so, but I don't really have the hang of it yet.

Anyway, I picked the Alton Brown recipe both because I trust him and it called for hand whisking. But I read enough comments on various recipes and doubted not only that my wrist and arm was up to the task, but was also pretty doubtful that I could coordinate the whole thin stream of oil while whisking thing.

So I turned to the Kitchenaid, and it did a spiff job.

Now to chop the shrimp, and mix it with the Créme fraiche, freshly-made may, Dijon mustard, ketchup (really?!) and paprika. I'm going with Penzey's smoked paprikia, ’cause that just seeem right.

The recipe came from scandinaviafood.com after printing out several different shrimp salad recipes all alleging to be Scandinavian. (Every family's grandmothers have their favorites, no doubt.) But a close read of it doesn't show the mayo ever being added! I'm betting that's a error of omission rather than an error of listing an extra ingredient, especially after reading other recipes.

I'm going to serve the raksallad as an appetizer with cocktail rye, crackers, and cucumber slices as choices for carrier devices.

One of the recipes I'm not using specifically said that the mayo didn't have to be homemade, which only served to put the idea in my head. And the rest of the recipe is just too darned easy. I like these potlucks not only because they're leading me to regularly make things I've never made before, but also to learn new cooking techniques in the process. Hence, the homemade mayo.

Hope your weekend is as much fun as mine looks to be!

don_fitch! As we begin this month of giving thanks, I send thanks and glee to the universe and fandom for bringing you into my life a few decades back, and to you for adding so much delight to it through your friendship, sensibilities, and skills with a slip-sheeter. And so much more, oh, so much more.

Know that your 88th year spinning ’round the sun starts with as much love as I can possibly send through the electrons, with equal measures of respect and admiration accompanying it.

The 2015 Hugo Awards ceremony is up and running on the Livestream.com website.

It's in 4 segments and includes the pre-show and post-show.

I've seen several comments about the UStream feed over the past few days. At this time, I don't know whether the video will eventually be posted there or not.

AKA: They'll let anybody own a house, whether they're fit to or not

Background: my boiler heats my water; I don't have a separate water heater.

I do various things: try another tap; go downstairs and peer at the silent boiler; shine a light and notice it appears to be seeping water onto the floor an a somewhat increased rate; turn the thermostat to heat and crank the temp up to 86 in an attempt to get the boiler to start up (*click* *click* *nothing*); and eventually go to bed, thanking the stars and calendar that it's August and who needs hot water anyway.

Monday: Call Boiler Guy. "This number is temporarily disconnected." Hmmm....that, combined with the fact that they didn't return repeated calls for a cleaning throughout the last utterly horrid heating season leads me to suspect they may be out of business.

Call place that delivers my oil, remembering a letter mentioning that they do cleanings now. Beside, it's Squier Oil. Of my Squiers. So, hey. Talk with Ed, the guy who worked with me to coordinate deliveries during aforementioned horrid heating season, when it was impossible to shovel a path to the fill cap. Mention need for cleaning, water on floor, furnace that won't come on. Arrange for Wednesday visit. Learn why a bit of seeping is better left alone. State that I think I'm beyond a bit of seeping. Learn a thing to try with the water valves, 'cause minerals sometimes build up and stop the auto-fill for the water.

Leave for a couple of days. Stay with friendly cat in a lovely, comfortable home. It's good to have friends, especially friends who give you house keys for decades at a time. Answer phone call to schedule time for Wednesday visit; talk about some of the details with the scheduler. Shower. Ah, warm water is nice, especially in a house with central air. Make contingency plans about possibly needing to return.

Answer phone call confirming 10:30am appointment for boiler cleaning. Scheduler asks (in a confirming sort of tone), "And it doesn't come on when you push the reset button, right?"

Geri Sullivan, Girl Homeowner responds with a query of her own: "There's a reset button?"

Get off phone, go downstairs and stare at boiler. Notice little red button and the instruction next to it: "Push to Reset."

Something like 10-15 minutes later, it turns off. I go to kitchen tap, set it to hot, and let the water run. It takes a bit longer than usual, but hot (not just warmish, *hot*) water is soon running from the tap.

They're still coming at 10:30. The boiler rather desperately needs cleaning and there's still all that seeping water on the floor. But I have hot water. And I'll probably remember that my boiler has an easy-to-find, easy-to-use reset button.

They'll let anybody own a house. There aren't any qualifying tests demonstrating competencies for living in it, using the appliances correctly, or repairing anything.

Just like they'll let anybody join Facebook, whether or not they know if long, chatty posts are appropriate there. Apologies to friends seeing this in both places.*


*Yes, I joined Facebook. Really. After all these years of adamantly staying away it and everything. But I'm damned if I'm going to put the app on my phone. Not while they demand access to my frigging call history to install it. And other things....

My Worldcon Site Selection ballot went in the mail last week, with DC17 in first place. Many factors went into my vote, but the bottom line for me came down to the committee. The DC17 bid committee is gob-smackingly large, but that’s because it’s composed of bunches of next generation convention runners working with experienced oldpharts. I imprinted on a multi-generational fandom, developing close friendships with Walt Willis, Chuch Harris, James White, Vin¢ Clarke, and others when they were in their 60s and 70s and I was in my 30s and 40s. Now that I’m in my 60s, I love that my circle of friends has grown to include fans in their 20s and 30s as well as those in my age group and older.

That’s the personal side of it. From a fannish perspective, I’m glad (and relieved) to see the younger fans on the DC committee -- and those I’m working with on MidAmeriCon II -- eagerly learning about fannish traditions and sensibilities, and carrying the things I love about fandom forward into the future. And I'm glad to see the depth of experience present as well.

I have a few minor nits, but the Wall Street Journal mostly got this article about convention naming terminology and practices right.

The article even mentions Fancyclopedia, and links to it on fanac.org.

Other terminology I never expected to see in the Wall Street Journal, let alone pretty much correctly used? "Relaxacons." I especially like the article's close:

"No matter the size of the gathering, con-goers are sure to find a convivial convergence of confederates."

Kudos to Ben Zimmer and his "Word on the Street" column.

benveniste, I've just digitized 320 slides including the 4 below. What a fun trip down memory lane.

(Clicking through takes you to a larger image.

kaffy_r, I'll give you the full res versions when I'm in Chicago next month. Oh, yeah, I ought to tell you, I'm hoping to celebrate #61 with you,

dr_whuh, and that carnyjack guy who is no longer on LJ.) 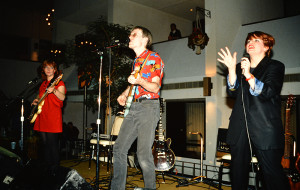 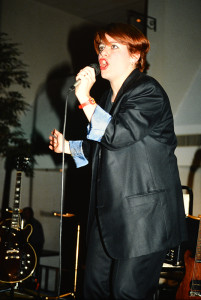 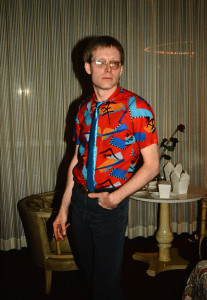 With a tip o'the link hat to ULTRAGOTHA on File 770.

1965: Rolling Stones (I Can't Get No) Satisfaction

2013: Rolling Stones "(I Can't Get No) Satisfaction at Glastonbury.

Mick Jagger was a month short of 70 for that Glastonbury performance. It shows in his voice, which is what sent me looking for the earlier footage. But the visuals, and the similarities and differences between the two performances -- in body language, in the audiences, in staging, and, well, everything -- is what has me intrigued and watching tonight.

I was alive for both, and present at neither. Thanks to the fact that we live in the future, I can watch both anytime I want, 24/7, on a large monitor while sitting in my office or pretty much anywhere at all on my phone.
Collapse